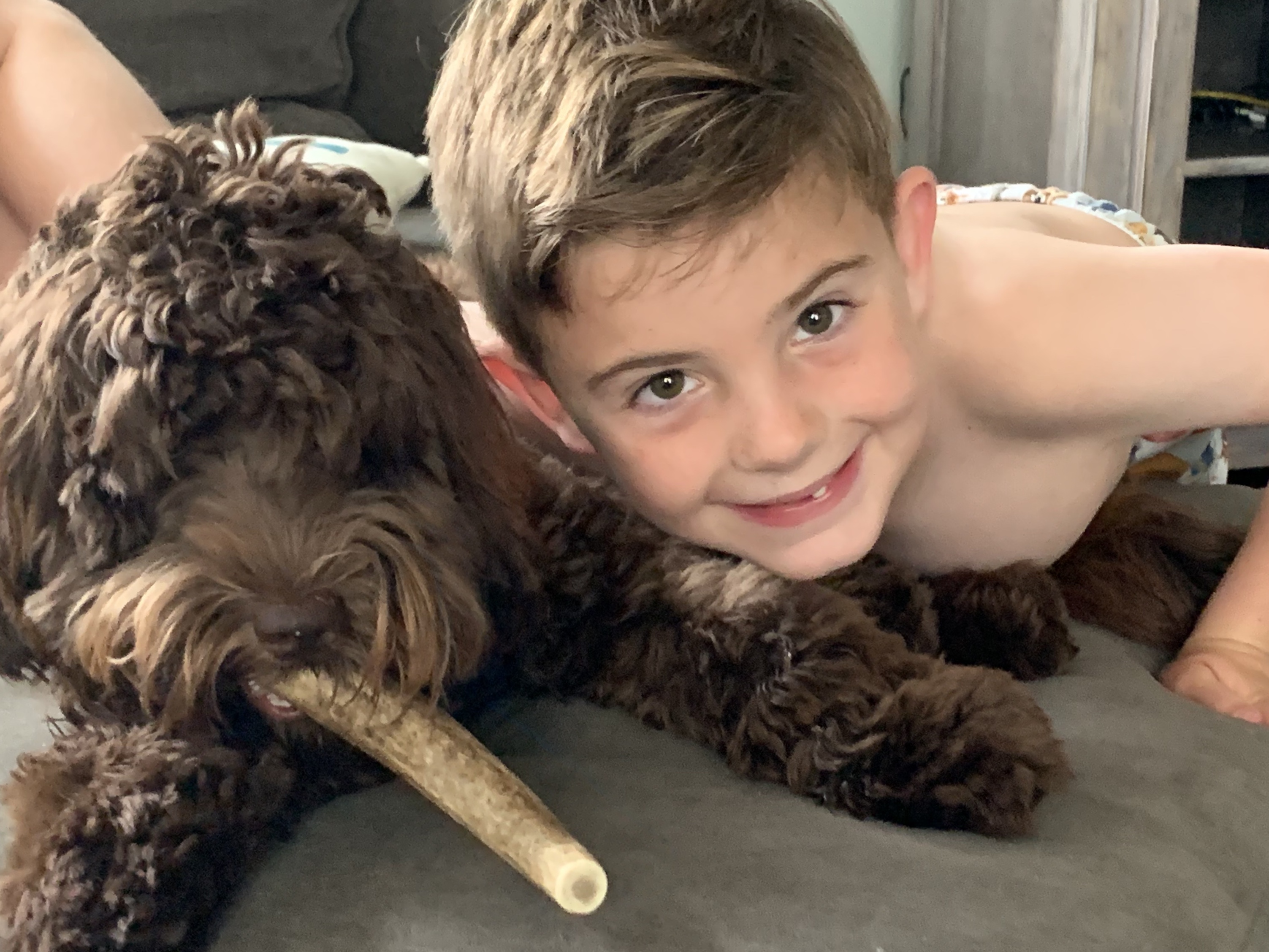 Raising funds to support CHD kids – for research, care and a better life!

We are walking as Caden’s Crew with Big Hearts to Little Hearts for our 7th year! Melanie and Michael are also running the Rothman 8k at the Philly Marathon on Nov. 23 as a part of the BH2LH Team. Our fundraising supports research and programs for the littlest heart patients, like Caden.

In 2013 we participated in the walk for the first time and pulled Caden in a wagon. He was 15 months old but hadn’t yet learned to walk after having two open heart surgeries. In 2014, he happily trotted alongside us all. Each year, watching him walk/run/dart/weave down the Manasquan boardwalk at this walk, we hold back a few emotional tears. Sometimes just watching him LIVE is an overwhelming feeling. We are constantly in awe by his actions – how he can hit a golf ball or throw a baseball with so much power or how fast he can run or how he can do pull-ups! Our prayer is that every heart family gets that chance to watch their heart warrior thrive. The BH2LH Annual Walk and Philly Marathon Run Team both directly benefit the Cardiac Center at the Children’s Hospital of Philadelphia and other important cardiac programs, that in turn impact the lives of our loved ones with congenital heart disease.

Michael and I are forever grateful for the individualized care that Caden received at CHOP and we know firsthand that the research matters. Please help us support additional groundbreaking moments in pediatric cardiac research and care. Thank you for reading this and donating to this cause so close to our hearts. Caden thanks you from the bottom of his very special heart!

Thank you for your support!

Here you can read about Caden’s story: On July 24, 2012, Caden was born in the CHOP Garbose Special Delivery Unit with d-TGA, VSD and PS. (These things means that his aorta and pulmonary artery were switched from the way they need to be for proper function – Transposition of the Great Arteries, he had a hole between the lower chambers of his heart called a Ventricular Septal Defect, and a narrowing of his pulmonary valve known as Pulmonary Stenosis). We knew about these things since 19 weeks into the pregnancy and received regular prenatal care from cardiologist Dr. Goldberg and a team of other doctors and nurses in the CHOP Fetal Diagnosis and Treatment Center. Most often TGA is corrected within the first week of life by a procedure called an arterial switch and we hoped for him to undergo this surgery after birth. When he was first born at CHOP, Dr. Glatz performed an atrial balloon septostomy to create a hole (an ASD) between the upper chambers of his heart. With the two holes in his heart – his ASD and his VSD – his blood could mix and become oxygenated enough for him to be stable. At first we still hoped for an arterial switch procedure to correct his d-TGA, but within the first days of his life we discovered that his PS was too severe and he was not a good candidate for a switch procedure. We planned for him to have a different repair procedure between four and ten months old. With his oxygen levels hovering around 80%, we left the hospital at five days old with a pulse ox machine, a bunch of nerves and a lot of hope.
After a few months it was clear that Caden’s oxygen levels weren’t going to remain high enough for everyone’s comfort. When Caden was four months old, he had his first open heart surgery. Dr. Spray placed a BT shunt which increased his pulmonary blood flow and increased his oxygen levels. That worked well and after a five day hospital stay we were home. Now the plan was to move his full repair surgery to about one year old. Growing bigger meant growing stronger which is a benefit for any cardiac surgery if you have that luxury. On August 1, 2013 Caden underwent his “big” surgery for his full repair. Dr. Spray removed the BT shunt, closed the ASD, and performed what’s called a Rastelli procedure to correct the d-TGA. In brief, by baffling Caden’s VSD with a GoreTex patch, blood is directed from his left ventricle to his aorta properly. Then a new valved conduit is inserted to establish continuity between the right ventricle and the pulmonary artery. Once again we were discharged in five short days after this amazing heart reconfiguration. Caden will outgrow that conduit at some point in childhood and need it replaced, but we are hopeful that the hardest, biggest surgery is now behind us.
Caden goes to CHOP regularly for cardiac follow-ups and overall has been doing great. In August 2018, Caden began a daily baby aspirin regimen and we monitor his conduit width every 6 months. We have learned that each child’s cardiac care plan is individualized and can change as they grow, so we take Caden’s heart journey step by step. His uniquely configured heart is supporting his growing body well and we thank God for this miracle every day. This journey has also taught us so much about the strength and resilience of children and through that how to become stronger ourselves.
The Rastelli procedure that saved Caden’s life was first introduced in 1967 and our hearts are heavy to think about children born with a similarly complex defect prior to that time. We know that THE RESEARCH MATTERS. We are compelled to support research and programs that advance children’s cardiac care, giving better quality of life and longer lives to all cardiac superheros. We walk and run to celebrate Caden’s amazing heart and to keep moving forward in congenital heart disease research and care.