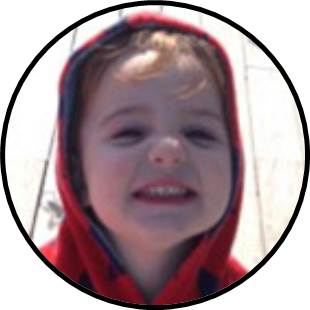 Caden was born in the CHOP Garbose Special Delivery Unit with d-TGA, VSD and PS. (Which means that his aorta and pulmonary artery were switched from the way they need to be for proper function, he had a hole between the lower chambers of his heart, and a narrowing of his pulmonary valve). This defect was discovered during an ultrasound about 19 weeks into pregnancy. Caden and his Mom received regular prenatal care from cardiologist Dr. Goldberg and a team of other doctors and nurses in the CHOP Fetal Diagnosis and Treatment Center.
Because of his PS, Caden’s case of d-TGA was not straightforward. Rather than having surgery to correct his defect in his first days of life (which can often be done), the plan for Caden involved a surgery at 4 months and his “big” surgery for his full repair at age one. Eight days after his first birthday, Dr. Spray performed a Rastelli procedure to correct the d-TGA. In brief, by baffling Caden’s VSD with a GoreTex patch, blood is directed from his left ventricle to his aorta properly. Then a new valved conduit is inserted to establish continuity between the right ventricle and the pulmonary artery. This was truly an amazing heart reconfiguration. Caden will outgrow his conduit at some point later in childhood and need it replaced to grow into adulthood, but the hardest, biggest surgery is now behind him. His regular cardiac follow-ups have all been great. His heart is strong, he is thriving and is meeting all of his normal developmental milestones. Caden is an amazing kid who is lucky to have received care from CHOP’s amazing staff!